DSI Studio accepts major image formats, including DICOM and NIFTI. The followings are steps to convert them to DSI Studio formats.

The former one needs to select all the DICOM files that are ready to be renamed, and then the file will be moved into its related folders. The latter one needs to assign a root folder containing all DICOM files to be sorted. DSI Studio will rename DICOM files and place them in different folders according to their pulse sequences (see figure to the right).

After renaming DICOM files, use [Batch processing][Step B2c: DICOM to SRC] and select the root folder that contains all scan data to generate src.gz files for the next step.

Another to convert DICOM to SRC is to use [Diffusion MRI Analysis][Step T1: Open Source Images] in the main window and manually select all dMRI files. After parsing the DICOM files, DSI Studio will be presenting a new window with a b-value table, as shown in the figure. 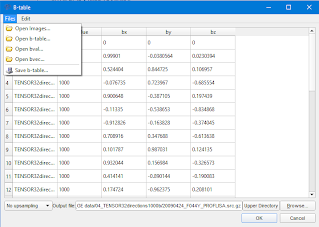 DSI Studio will show b-table extracted from the DICOM headers. You can replace the b-table by using the top [Files] menu.

*TIP: GE, Philips, and Toshiba scanners output numerous DICOM images for dMRI acquisitions. Instead of selecting all files, you can select only one of the DICOM files in [Step T1: Open Source Images], and DSI Studio will ask whether you would like to load all other DICOM images. Select yes to specify that you want all DICOM files to be loaded.

The NIFTI files include no b-table information, and we will also a bval and a bvec file to create an SRC file.

To convert one subject’s data, click on [Step T1: Open Source Images] in the main window and select the NIFTI file. DSI Studio will try to locate its associated bval and bvec files in the same folder. 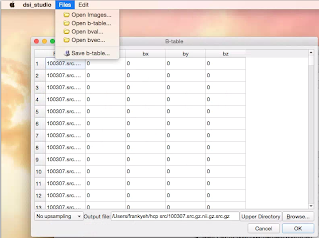 DSI Studio also has its own b-table text file format, arranged in bvalue bvecx bvecy bvecz. The first column is the b-value, and the rest is a unit vector of diffusion gradient direction.

DSI Studio will also search under the NIFTI file directory for a file named “grad_dev.nii.gz” to include gradient nonlinearity information and also ”nodif_brain_mask.nii.gz” as the brain mask.

Note that DSI Studio will obtain spatial parameters from other accessory files including “3dproc” and “reco”, which are stored in the same directory as 2dseq. In addition to these two files, the b-table will be obtained from the “method” file, which should be stored in the upper directory.  Make sure that these files exist and are in the correct relative directories.

Once the image is loaded, the b-table may need addition flipping (e.g. swap x-y, y-z, or x-z). For example, you may need to swap x-y to get the correct result.

Click [Step T1: Open Source Images] in the main window and select all fdf files in the folder. DSI Studio will extract b-table information and the DWI from the files.

It is recommended that the SRC files are examined by a quality control procedure to ensure its integrity and quality. The reference for this procedure is documented in Yeh, Fang-Cheng, et al. “Differential tractography as a track-based biomarker for neuronal injury.” NeuroImage 202 (2019): 116131.

To do this, use [Diffusion MRI Analysis][Step T1a: Quality Control] and select the folder that contains SRC files (DSI Studio will search for all SRC files in the subdirectories). DSI Studio will provide a report in the following format, which can be paste in Excel:

DSI Studio will use an outlier checking function (e.g. 3 median absolute deviations) to label problematic data with ‘low-quality outlier’.  The example on the top identifies a dataset with a neighboring DWI correlation of only 0.892282, which is substantially lower than the other. Another dataset 102008 has a different b-table, which cannot be used together with the others. If a dataset has a very low neighboring DWI correlation, you will need to examine the raw DWI images (see video above) to see if the problem is correctable. Otherwise, the problematic datasets should be excluded from the analysis.

DSI Studio allows for flipping the b-table before creating the SRC file. The functions are under the [Edit] menu.

DSI Studio can up-sample the dMRI signals to achieve a high spatial resolution. Once an SRC file is created (following the steps mentioned above), you may use the following steps to get a new SRC file with interpolated dMRI signals that achieves x2 or x4 upsampling