The diffusion metrics can be categorized into model-based metrics and model-free metrics. The model-based metrics are calculated by fitting dMRI signals with a model, such as a tensor model, NODDI model, and the model’s parameters will provide the metrics. The model-free metrics are directly calculated from the PDF of diffusion distribution (i.e., histogram of diffusion distribution) without assuming a model.

There are pros and cons concerning each approach. Model-based metrics need fewer diffusion sampling, and the metrics are usually associated with physical or biological references. The downside is the violation of models, which is common in biological studies. Model-free metrics need more diffusion samplings, and the association between metrics and biological findings requires tissue validation. The advantage is that it does not have a model assumption.

The following is a summary of how to interpret results from diffusion metrics.

The most commonly used model-based metrics are calculated from the diffusion tensor model:

AD, denoted by λ parallel, quantifies how fast water diffuses along the axonal fibers. It is estimated by λ1, the first eigenvalue of the tensor. RD, denoted by λ perpendicular, quantified how fast water diffuses across the axonal bundles. It is estimated by (λ2+λ3)/2, the average of the second and third eigenvalues of the tensor. MD is the diffusivity average from the three eigenvalues of the tensor. It is often regarded as an approximation of the overall diffusivities. FA is a non-unit fraction derived from the ratio between λ1, λ2, and λ3. It has a value ranging from 0 (isotropic) to 1(totally anisotropic). Myelinated fibers have high FA and low RD (Chang 2017).

Numerous studies have investigated the relation between diffusivity and pathological conditions:

When there is demyelination, RD changes dramatically (Song, 2002). If there is axonal loss, the AD drops (Song 2003). Many studies have used RD specifically for myelination, citing the demyelination studies. However, the fact that demyelination has RD change does not mean that good myelination is also reflected by RD (Change 2017). The interpretation of RD requires additional caution.

The model-free metrics calculated in DSI Studio include the following:

QA is the density of anisotropic diffusing water calculated from GQI (Yeh, 2010). Each voxel may have more than one principal diffusion directions (when two white matter tracts intersect), and each principal direction will have its QA value. It is noteworthy that there is only one FA for each voxel, regardless of the number of principal diffusion directions. QA scales with spin density and receiver gain, and it has an “arbitrary unit.” QA is often calibrated by scaling the largest isotropic component in the entire image volume to a unit (i.e., max(iso)=1). The normalized QA (NQA) further scales the largest QA in the scan to one.

Numerous studies have investigated the relation between model-free metrics and pathological conditions:

Difference between model-based and model-free

Here we focus on the differences between DTI and GQI, although other model-based and model-free methods exist.

Partial volume effect due to fiber and free water 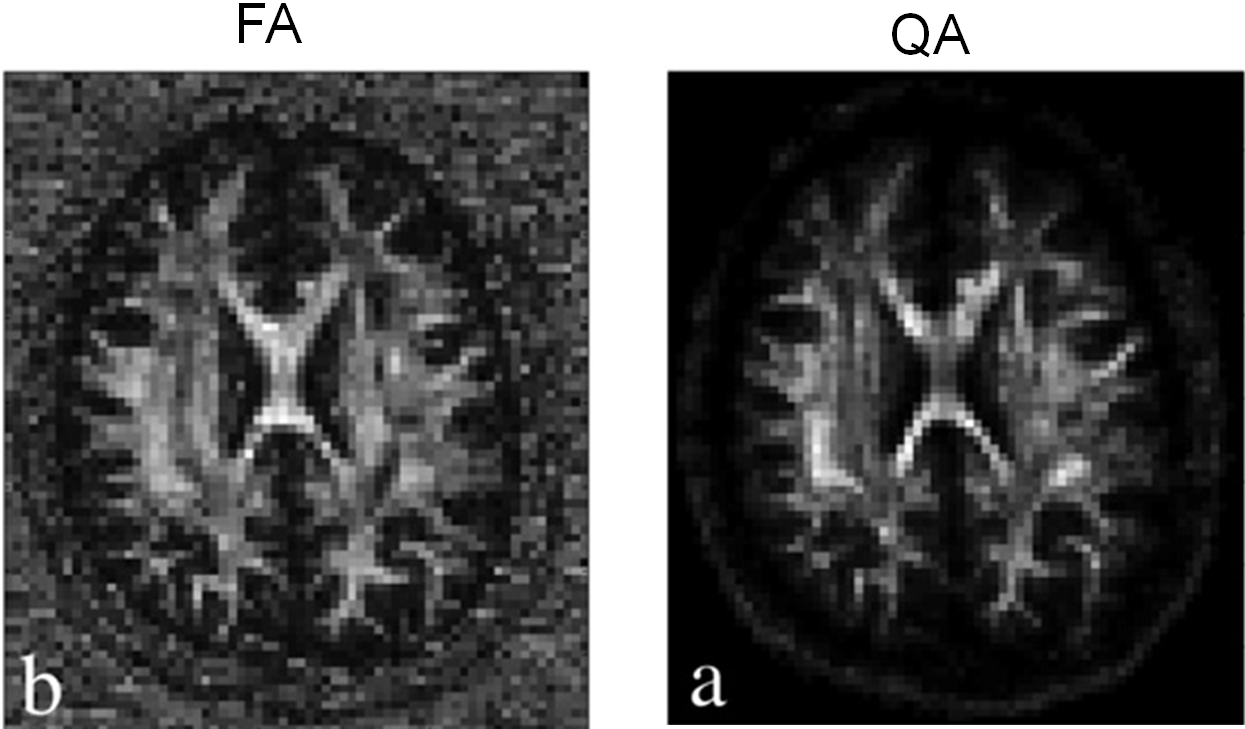 The DTI model does not specify restricted diffusion contributed by axonal myelination. The consequence is that FA, AD, MD will reflect a portfolio of biological changes including edema, inflammation, or just a superimposing crossing fiber (see Yeh F-C et al. PLoS ONE 8(11): e80713.2013). Using DTI metrics will result in a considerable variation due to the complexity of the real-world biological changes, and often time a large sample size is needed to find statistical significance. 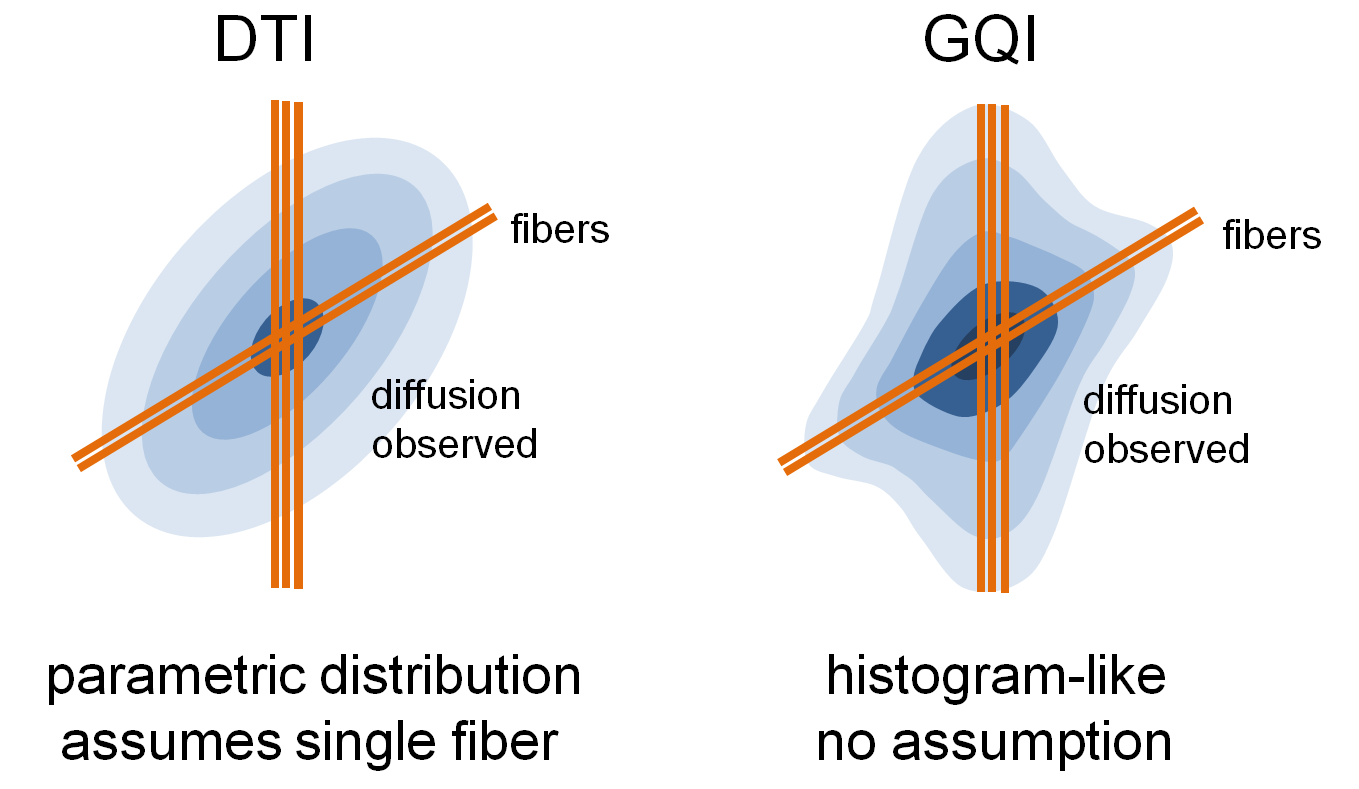 The metrics derived from DTI (e.g., FA, AD, RD, MD) cannot differentiate non-restricted and restricted diffusion. The diffusivity measures the overall “rate” of diffusion, and the metrics are an ensemble measure from both non-restricted (due to edema or free water) and restricted diffusion (myelination). The calculation also cannot address the condition of fibers. The biological association between DTI-based metrics is often affected by multiple counteracting factors, making the interpretation much more difficult.